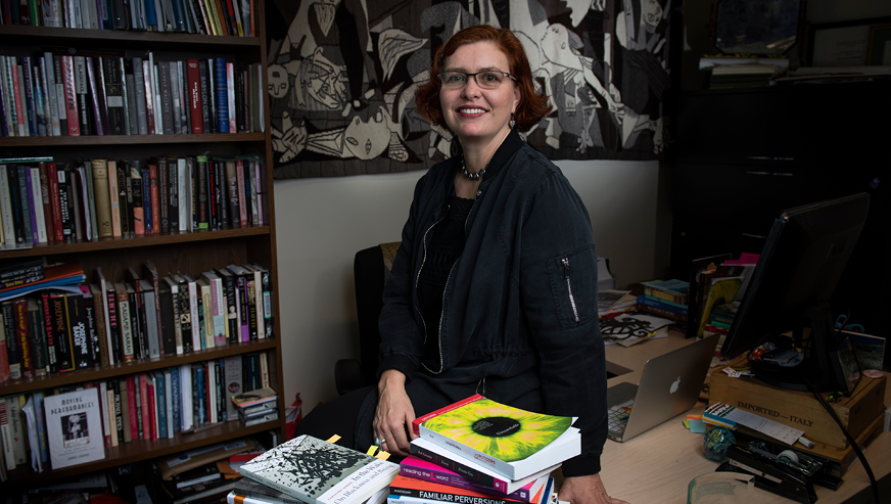 Jeanne Scheper, a UCI associate professor of gender & sexuality studies, an LGBTQ and academic labor activist, and a fierce feminist, was raised in a predominantly Black and poor area of Baltimore in an era of “white flight,” when waves of white people moved away from racially diversifying urban regions to more homogenized suburbs.

Her parents, who were academics, immersed her in a culture of community organizing. Her mother tackled “food deserts” by running a grocery co-op out of their basement and helped write a law enabling black home ownership in the city.

Reflecting on those days, Scheper says: “As a child, I saw that my neighborhood and my black neighbors would be the ones under National Guard rule and patrolled by tanks after a snowstorm, that helicopters would buzz the houses regularly enough to be called ‘urban birds,’ and that it would require walking to the white neighborhood on the other side of North Avenue to find a proper grocery store.”

“As a queer person coming out at the height of the HIV/AIDS epidemic,” she says, “I had the privilege of finding my gender and sexual identity through queer militant activism and learned, as my friend says, ‘There is no room for shame in the revolution.’”

Scheper, who earned a Ph.D. in English literature at UC Santa Barbara, came to UCI in 2009. Her research and teaching take up questions she began considering as a child – about race, gender and body politics. Zine-making is a fundamental feature of her courses. The small, handmade publications give those who do not find themselves represented in the mainstream political or media landscape an opportunity to express themselves and challenge that absence.

"Zines offer a perfect vehicle for all the most treasured aspects of a liberal arts education: DIY (do it yourself) creative thinking, skill-sharing, critical knowledge production, and collective public engagement," she says.

As part of her scholarship, Scheper studies the lives of early 20th-century African American women who used performance art to fight racism and sexism. Like zines, their singing, dancing, music, and plays were more than channels for self-expression; they were creative forms of sociopolitical dissent, refusing the terms of dominant culture.

Scheper published Moving Performances: Divas, Iconicity and Remembering the Modern Stage (Rutgers University Press) in 2016 and is currently writing a book about popular culture and sexual and gender minorities in the military – continuing her efforts to fight injustices.

“Like every LGBTQ person, I have faced threats, housing and job discrimination, hate, and stigma,” she says. “Coming out and standing up are everyday, ongoing battles. As a white LGBTQ person, I have not faced the worst violence against our community, but I will work to combat it.”