I was tempted to begin this article with the phrase, “In times like these,” but few of us have known times like these. Perhaps not even those few of us with memories of the 1918-1919 Spanish Flu. In the absence of testing and, generally, any reliable information about what exactly this pandemic is, we find ourselves in the midst of a vague, amorphous threat, armed only with partial knowledge, free-floating anxiety, and homemade masks. If we know anything for certain it’s that the threat is here now, not months away or even on our doorstep. This mix of unknown and familiar is why so many of us are drawn to science and speculative fiction these days, if not as categories of objects to read or watch, then as sources for the metaphors and narratives we use to talk and think about the pandemic. The three recommendations below—one novel, one TV series, and one film—reflect different aspects of our empirical reality and our anxieties. 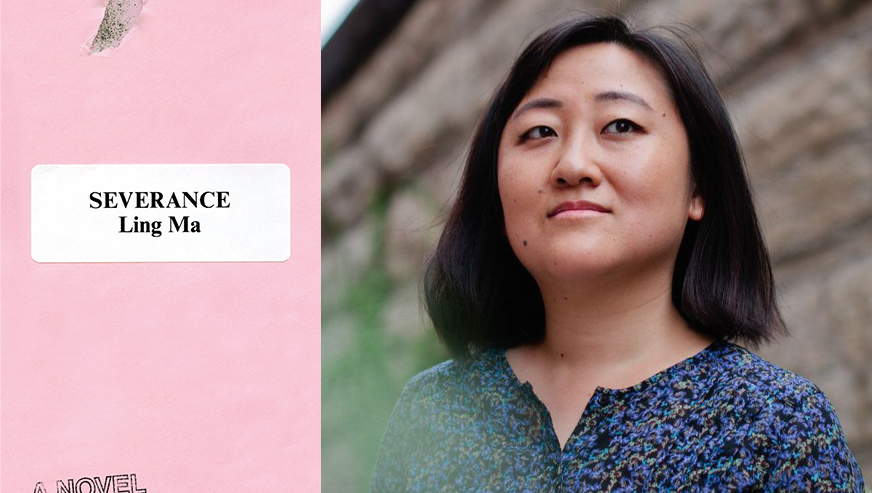 This astonishing 2018 debut novel by the Chicago-based writer Ling Ma has been heralded as prescient. It’s a zombie office novel set primarily in New York City in the years immediately following the 2008 financial crisis. The conceit is that a pandemic, called “Shen Fever,” has stricken the world. Victims of the disease succumb to a kind of terminal nostalgia, in which, bereft of mind and sense, they are doomed to repeat movements and gestures until their bodies waste away—a condition, as it were, that echoes the emotional experience of sheltering in place. Where the novel has struck many readers as eerily prescient is in how it proposes that the fever originated in the factories of its namesake, Shenzhen, the iconic manufacturing hub in China’s Pearl River Delta. The theory is that the fungal spores that cause the disease proliferate across the globe through supply chains, international travel and shipping routes. The novel’s protagonist, Candace Chen, one of the few in the world who is either immune or preternaturally lucky, oversees her company’s gradual shuttering, and eventually moves into her office, Bartleby-like. The scenes of her wandering the empty streets of Manhattan in her spare time (what, even, is time anymore?) armed with a camera and persona as “NY Ghost,” recall scenes from films like “Omega Man” (1971), “Vanilla Sky” (2001), and the 2007 “I Am Legend,” but are now easily and literally visualized in the new genre of YouTube videos of COVID-era empty streets. What I find most striking about the novel, rereading it now, is not so much its depiction of a pandemic, but its depiction of an apocalypse that’s neither bang nor whimper but a gradual slowdown and quieting of activity that’s paradoxically happening at warp-speed. A whimper-bang.

Those in possession of Netflix subscriptions will have access to this binge-worthy Korean drama that combines zombie apocalypse (one of the most ready-to-hand COVID-era tropes), palace intrigue and epidemic. Set in Joseon-era Korea, the series takes up the conventions of the period drama, and has as its central fantasy and protagonist a wise Confucian ruler. The complexity of the plot ratchets up as the series unfolds, but the gist is that an outbreak of a mysterious disease in the southeastern reaches of the peninsula threatens the stability of the unified kingdom.

Meanwhile, an upstart, non-royal family has designs on the throne and may or may not be behind the outbreak. While some towns and forts find themselves besieged by hordes of the flesh-eating zombies, this series doesn’t resonate with the mundane experience of sheltering-in-place but instead reflects our darkest visions of the speed and arbitrariness of COVID-19’s spread.

Another fantasy that the series plays with is that of the allegedly “democratic” threat of disease: that it affects the rich and poor alike. In our reality, as the poor and communities of color succumb to COVID-19 in wild disproportion, we know this not to be empirically true; but the fantasy persists. What seems to make “Kingdom” especially relevant for the COVID era is its quasi-epidemiological approach to the story of the zombie disease, in which we are guided by a coolheaded nurse, expertly played by Bae Doona. Anecdotally, I’ve observed that while the people in my circles frequently mention this series, they almost never reference a certain other series with similar themes and tropes, and that has the distinction of being one of the most high-profile television events of the last decade: “Game of Thrones.” Possibly this is because “Game of Thrones” recently came to a (disappointing) end last year, and those of us who followed it closely just want to forget that we ever invested so heavily in it, but I can’t help but think that “Kingdom” is compelling now because it portrays a disease and social unraveling that are undeniably horrifying and stress-inducing for the viewer, but tractable under ethical leadership guided by medical experts.

The coronavirus pandemic isn’t just an epidemiological catastrophe, and it didn’t come out of the blue. It’s a symptom of the shifting relationship between humans and the natural environment, especially the encroachment of urban space on rural areas, and the gravitational pull of urban spaces on rural populations. As scholars like Mike Davis and Rob Wallace have shown, we live in an era of epidemics, not in the midst of a single, hundred- or five-hundred-year cataclysm. To think of coronavirus as a historically isolated event is to nominate history’s repetition. M. Night Shyamalan’s 2008 film “The Happening” makes no attempt at grappling with such a historical and global sweep. Instead, it focuses on one extremely salient conceit that fuses together the threat of pandemic with the threat of environmental catastrophe, that other existential foe from what now seems like an alternate universe and for which we need a species-wide response even more radical than global lockdown. In “The Happening,” which brings together the unlikely pair of Marky Mark and Zooey Deschanel, there aren’t exactly zombies, but the victims of a mysterious disease that…lose their heads, so to speak. The explanation, as it turns out, is that (spoiler alert) the planet’s flora have evolved a violently effective mechanism for fighting back against the threat of humankind. One particularly resonant detail is that people are most susceptible to the airborne toxin when they’re in densely packed groups. The survivors are those who social distance.

Christopher Tzechung Fan is an assistant professor of English at UCI. He co-founded and serves as senior editor at Hyphen magazine. His research and writing focus on 20th and 21st-century Anglophone and Asian/American cultural production, speculative fiction, and racial formation. He is currently working on a book, tentatively titled Principles of Selection: Asian American Fiction after 1965, about post-1965 Asian/American fiction (especially science fiction) as an articulation of immigration policy and US-Asia political economy. Follow Fan on Twitter @sea_fan.

Want to learn more about why there is a surge in people watching dystopian and pandemic-related science and speculative fiction content? Check out Chris Fan in conversation with Dean of the UCI School of Humanities Tyrus Miller below.