An underdog turned Anteater for life

UCI alumnus gives back to university for its life-changing experience 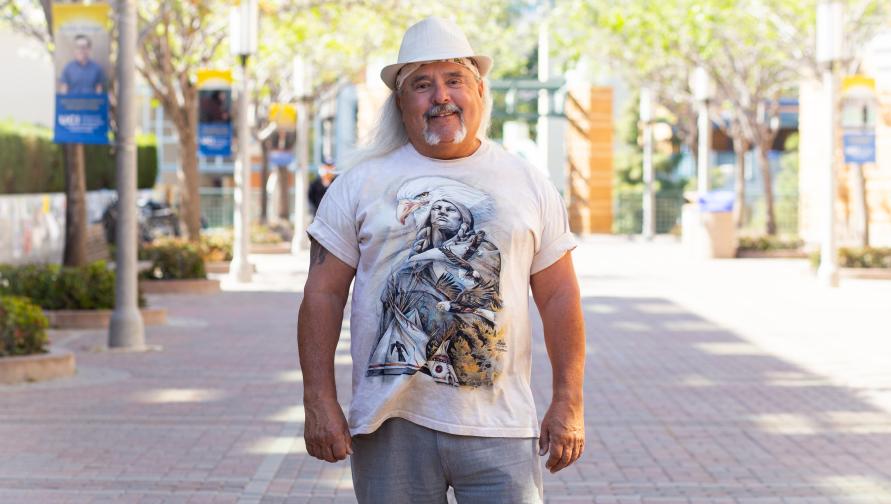 On the surface, Al Encinias ’72 didn’t appear to be college material. But that is the whole point of this story.

“Wow, man that’s a lot of stuff I went through,” he marvels. “How the hell did I make it here?”

Well, that’s a rhetorical question. Encinias knows how he made it “here” and he shouts it to anyone who will listen: UCI.

“This entire campus was a vortex of compassion and encouragement. UCI was the turnaround in my life,” he says.

His story begins when he was ditching school in his East L.A. neighborhood one day back in 1967. A van pulled up and a lady inside asked if he wanted to go to college.

He barely even went to high school. But for some reason, he heard himself saying, “Sure, why not.”

Encinias climbed into the lady’s van and next thing he knew he was at an office listening to her spiel about how higher education would change his life. This was all news to him. His high school classes consisted of woodworking, typing and cosmetology.

“Minority students were not expected to go to college,” he says.

But Encinias liked what he heard and so he signed some papers, becoming one of the first minority students (he’s Hispanic and Native American) admitted into a California university under the state’s “2 percent rule” affirmative-action program, a precursor to the Educational Opportunity Program, which was created in 1969.

When Encinias arrived at UCI in 1968, bison still roamed and orange groves scented the air, a serene switch up from the concrete jungle of East LA. But he was lost in the classroom.

“These guys were talking with words that were above my level of vocabulary,” he says. “I believe I failed my entire freshman year.”

His professors refused to fail him, though. They taught him how to study, how to learn.

It was fairly shocking to him. Up until then, most people had given up on him.

“Close friends gave up on me,” he says. “They just left. And I understand. You don’t want to be anchored to an anchor. But UCI, they saw potential in me. Maybe they saw a brightness that I didn’t even see. But they just kindled it and blew on the fire to make it brighter.”

His grades improved and he graduated in four years with a B.A. in Spanish. Next he earned his teaching credential. Then a job teaching elementary school in Santa Ana. In 1980, he became a reserve police officer in Newport Beach. He left teaching in 1986 to become a full-time police officer, but it only lasted 45 days before he returned to the classroom. He had to be true to his calling.

“The students who are basically all the ‘bad’ kids you don’t want to have in your classroom,” he says. “That’s who I wanted.”

Encinias’ wife of 40 years, Anne, is a former teacher herself. The priest who took custody of Encinias long ago presided over their wedding, by the way.

“He was really surprised at how well I did,” Encinias says, laughing.

Encinias retired in 2011. He is 67 now and a part-time “ambassador” at the Rancho San Joaquin Golf Course in Irvine where he plays a few rounds a week. He also likes to visit the UCI campus regularly. Look for a guy with long white hair, a Mickey Mouse watch and tattoos on his arm of a dream-catcher and prayer hands.

“From the time I left UCI it’s always been in my heart to come back and do something,” he says.

The Enciniases have recently pledged a gift of $25,000 to create an endowment for UCI’s renowned M.F.A. Programs in Writing called the Jose & Susanna Encinias Award in Creative Writing, in memory of Al’s parents. Encinias’ dad never learned to read or write more than his name. The endowment will provide one student in either the fiction or poetry division of the program with a $1,000 scholarship each year, in perpetuity.

At one point, Encinias thought he might become a writer himself. He even spoke to Oakley Hall, the notable mystery writer who helmed UCI’s M.F.A. fiction division from 1969 to 1990.

“I was always interested in being a writer, but never had the opportunity to do so. Life got in the way,” he says. Though his dream of becoming a writer did not pan out, he believes in the power of UCI’s writers enough to support them generously. “Writers have great influence on the way society thinks.”

In addition to supporting UCI writers, the Enciniases also donate $100 a month to the university’s Shakespeare Center, in honor of UCI English Ph.D. alumnus and original writing director of UCI’s Humanities Core Course, Jeffrey Smith. Smith, who wrote his doctoral dissertation on Shakespeare, was a mentor to Encinias when he was a student.

The Enciniases also write another $1,000 check a year to the UCI School of Humanities’ Dean’s Excellence Fund. The fund supports Humanities students and faculty through merit awards and scholarships.

If UCI asked him, he says: “I’d bus tables, I’d scrub cars; whatever they want me to do. I plan on always being a part of this campus.”