Optimism to the max 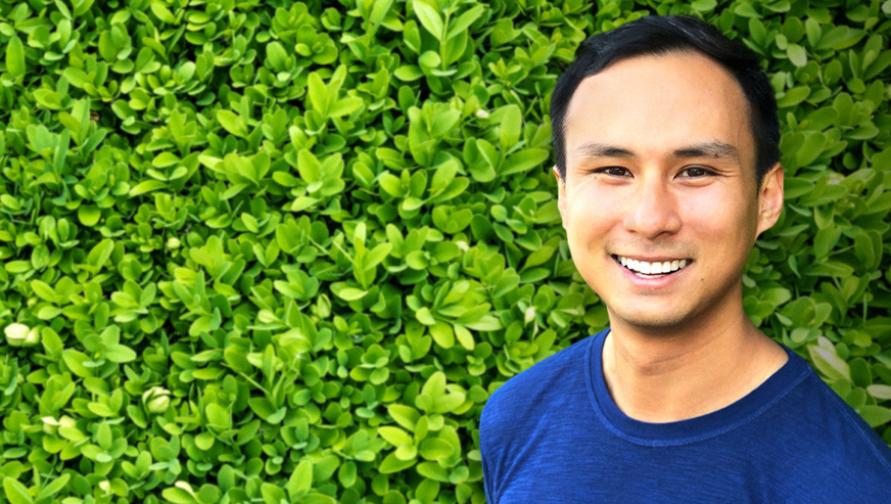 Since graduating from the University of California, Irvine in 2009 with a B.A. in Spanish and B.A. in international studies, Almendras has made a point of continuing his personal growth and education through his work, travel and interaction with people and places. And, in turn, he thrives on sharing his knowledge by mentoring and nurturing others.

That’s key to his job as vice president of global creative marketing at IMAX, the global entertainment technology giant. Almendras, 34, heads a large team whose job it is to protect the brand’s integrity, help the company evolve and grow, and provide consistent messaging among employees, studios, theaters and consumers.

The Glendale native joined IMAX nearly five years ago after a stint at the boutique marketing agency The Sheppard, where his Spanish skills positioned him to lead projects for Herbalife in Mexico City and Asia at the age of 24. This gave him a taste of what would become a lifelong passion: travel.

Luck, maybe, but definitely a lot of hard work.

“When I’m at a live activation in Paris, I’m up for 16 hours. During the afternoon, I’m working on a proposal for another project. When I’m on a plane, I’m working. I finish presentations in the car. I’ve run shoots where I’m producer and coordinator and interviewer and director,” he says. “I enjoy it; it’s the adrenaline.”

After just seven years at The Sheppard, where he started as a part-time intern, Almendras was offered a vice president position. But he opted instead to take a step back and join IMAX as a creative services manager.

“I didn’t want to be a big fish in a small pond,” he says. “I wanted to start building brands that I was never a part of. I wanted to build a brand from the inside out.”

He’s had his share of roadblocks along the way to his successes. Initially, Almendras wasn’t sure where his Spanish major would take him. Though he had applied (and been accepted) to marketing and communications programs at several other universities, UCI provided him the opportunity to explore his Filipino and Spanish roots through language. He admits the transition to college was a bit rocky, finding himself in Spanish classes with native speakers. “I did very well in high school,” he says, “but then I went to college and I was lost.”

At one point, a UCI professor advised him to change to a different major than Spanish. “I don’t know whether it was a strategy of his or whatever it was, but I told myself ‘no, I’m going to figure it out. I’m going to make it happen,’” he recalls.

A year later, Almendras was studying abroad in Spain, first in the small town of Cádiz for five weeks for a pre-immersion program, then spending a year in Granada.

“At 20, I said, I need to go somewhere and start from scratch. I needed to find myself,” he says. “That opened my mind.”

Since then, travel has remained an important part of his life. His IMAX job doesn’t require a lot of travel, but that’s fine with him. “I actually enjoy traveling now for myself. I’ve attached trips off the back of each of my trips to Bangkok and Europe and all that at The Sheppard, but I think now, traveling for myself in a different light is very nice,” he says.

That personal travel would include what he calls his “Eat, Pray, Love” journey in 2019, during which he spent time in Mexico (Guadalajara and Tulum), Bali and Sri Lanka. That travel, he says, brought him inner peace.

“I absolutely loved Sri Lanka. Sri Lanka was amazing. I feel like it was a very special trip for my mom and me. It was spiritual,” he says, adding that he also enjoyed his travels to Japan, Morocco and Spain. “I had traveled to these places at different phases of my life. So how I was engaging with people, how I was engaging with culture was very different for each of them.”

As the pandemic brought much of the film industry to a standstill, Almendras faced the familiar challenge of navigating the work-at-home environment.

“The big thing for me was how do you create order as soon as possible through chaos? How do you transition everyone to home? How do I empathize with the group, how do I encourage them? But also, how do I communicate that work doesn’t stop?” he says. “Pandemic or not, you will run into pressure points and roadblocks, so how do we navigate them? I think the human being under immense pressure – and my boss always says this – doesn’t build character, it reveals character, how you respond and react to it.”

Because IMAX is a global company with more than 1,500 theaters in more than 80 countries, business operations never stopped. Before the pandemic reached the U.S., “our China team had already gone through a quarantine, and we didn’t really understand it yet,” says Almendras, who almost immediately launched into problem-solving mode as he and his boss formed a task force to plan their response to what would eventually become a worldwide pandemic.

“It was a ripple effect. As Asia was able to take control, theaters started to shut down in the western hemisphere and then Asia started to open up,” he says. “What that brought to light is that content doesn’t always have to come from Hollywood.”

Outside of work, Almendras remained busy. In December, he bought a condo in West Hollywood and is having work done there. But he also had an even bigger, more personal venture.

About nine years ago, Almendras signed on to the Catholic Big Brothers Big Sisters program. He had already been involved in a lot of community service and philanthropic work in high school, including serving as international trustee for Key Club International, and he later worked with interns and served as a mentor at his workplaces. But he wanted to do more.

“I didn’t want to volunteer or do something where it’s a one-off, and I don’t see where the proceeds go or my hard work goes,” he says. “I never had a male role model in my life. My mom’s a single parent, and I’m an only child.”

He was matched with an 8-year-old boy named Diego, whose father was incarcerated and whose mother was raising him and his three siblings largely on her own. “I had to really figure out how to work with him as he got older,” he says. “My ultimate goal was to get him into college.”

They worked out a plan and began meeting weekly to study when he was in high school. “He would do work, and he would ask me questions. Follow the plan, follow the plan,” Almendras says. “In fall semester, 2019, his GPA was 3.5. Flash forward in 2020 fall, and his GPA was 4.83.”

Throughout the pandemic, he committed to meeting with Diego, via phone, for check-ins. Diego recently found out he was accepted to San Francisco State, but, “his goal is to go to UC Irvine because I had gone to UC Irvine, and we had visited UC Irvine,” Almendras says. “It’s been a great journey.”

As the pandemic shows signs of turning the corner, Almendras trains his focus to what happens as IMAX theaters begin to reopen. Much has changed over the last year, including the shift to at-home viewing via streaming services. But he’s not worried.

“There’s something to be said for 2½ hours, 3½ hours of complete zero-disturbance in a theater,” he says. “Obviously, there’s capacity limitations, but sharing an experience with a group of people who want to be there and are fans of that franchise, that genre, that storytelling or that director – that human connectivity through shared experience that ultimately transports you to another world and is an escape is much needed in a very overly stimulated, cluttered media landscape.”

He acknowledges there will be challenges for IMAX, but, in his typical style, he views them as opportunities for himself and his company.