The art of living 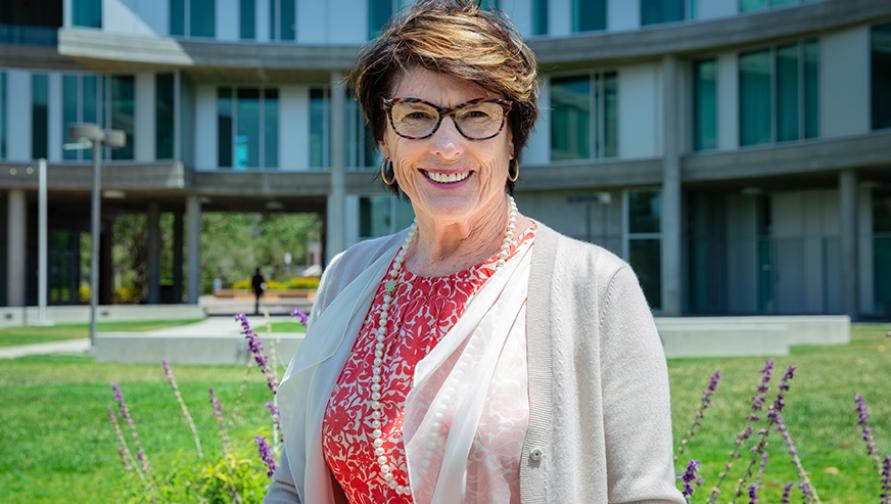 LaVonne Smith ’94 is the very embodiment of the humanities in their ability to change lives. World traveler, writer, art admirer and collector, openminded and globally aware—she honed her creativity while a student at the University of California, Irvine and has used her colorful life experiences to put that creativity to use.

After completing her sophomore year at San Jose State, she traveled to Washington D.C. where the energy and big-city atmosphere inspired her to stay for longer than the short visit she had intended. She found a job at North American Aviation at its K-St. office, and attended George Washington University at night. But she wouldn’t stay in Washington, D.C. for too long. She met her future husband, Brian Smith, during a chance encounter in an elevator on a rainy day. This serendipitous meeting would spark a whirlwind of travel and adventure.

“We went from a full-dress military wedding in Washington, D.C. to being civilians living in Bangkok,” says Smith. Her husband’s first civilian job after leaving the Navy would take them to Thailand for two years.

The Smiths’ stay in Thailand coincided with the early build-up to the Vietnam War, which deeply impacted their view of the world and provided experiences that were sometimes more frightening than thrilling. Thereafter, though, their travels took them to places where war was not an imminent threat; the list of which reads like a wishful traveler’s bucket list. They moved to San Francisco during the height of the Haight-Ashbury period. Six months later, they were off to Australia for three years working on a large port facility and mine in Northern Queensland. Two Smith children were born there. Next was a six-month stay in Northern Canada. A third child was born there.

Eventually, the Smith family set down roots in Orange County, Calif. where the final two Smith children were born. Now having traveled and developed a passion for art and thirst for writing, Smith decided to finish her undergraduate degree. There was just one challenge: Smith suffers from hearing loss and had long been deterred by colleges’ inadequate response to accommodate her need to read lips. When she learned that the Americans with Disabilities Act, then just launched, would help her get classroom assistance, she enrolled at Orange Coast Community College, and then transferred to UCI.

At UCI, Smith majored in English with a concentration on creative writing. She feels her experience in the comfort of the School of Humanities opened up worlds and talents that even world travel itself did not provide. “The humanities are the foundation of education,” says Smith. “They provide the ability to read, write, think, and create; and to see and understand the ‘other’ across time and place.”

The campus’s disability services unit supported Smith’s endeavors—they arranged notetakers, assisted with telephone registration, and helped with any special accommodations she needed to participate and engage in the classroom.

Smith graduated from UCI at 51 years old and dived fully into both professional and creative endeavors. She served as vice president and administrator for an executive search company she owned with her husband. She also began putting her creative-writing chops to work by writing a memoir centered on her experiences in Southeast Asia and her many travels around the globe. Though all true, her adventurous story sometimes reads like fiction. She also furthered her interest in art, inspired by her extensive travels throughout the Far East, Southeast and South Asia. She is particularly passionate about ancient Buddhist art.

Since graduating, Smith has supported the UCI School of Humanities in a variety of ways, including hiring 14 students for one-year internships at her executive search company, funding the first endowment for Humanities Out There, supporting UCI’s Friends of Art History, offering her beautiful home in Corona Del Mar as the venue for countless school events, and more. At one event she hosted for donors of the School of Humanities, she spoke on the history of porcelains coming from China into Europe and the English response which resulted in Staffordshire blue and white. Most recently, she made a significant major gift to the UCI Forum for the Academy and the Public, recognizing the initiative’s significant role in bringing together academics and the community to discuss the most pressing issues of our time. Smith’s generosity has already enabled the Forum to host pop-up events on the Brett Kavanaugh controversy and Pittsburgh Synagogue shooting.

In addition to such explicit acts of generosity, Smith gives back by showing up. You will find her at school events, sitting in the front row to read lips and actively participate. She is beloved by UCI School of Humanities faculty, staff and alumni, including Michelle Latiolais, professor of English and director of the UCI M.F.A. Programs in Writing. "UCI had the great good fortune to have LaVonne Smith as a student, and like any person of true virtue, she models what we all should be,” says Latiolais.

For Smith, UCI is the place her passions converged and were further brought to life. Her gratitude fuels her many acts of service to the university.

“Being involved with UCI is my greatest pleasure beyond my children and their families,” says Smith.

With additional reporting by Rosemary McClure