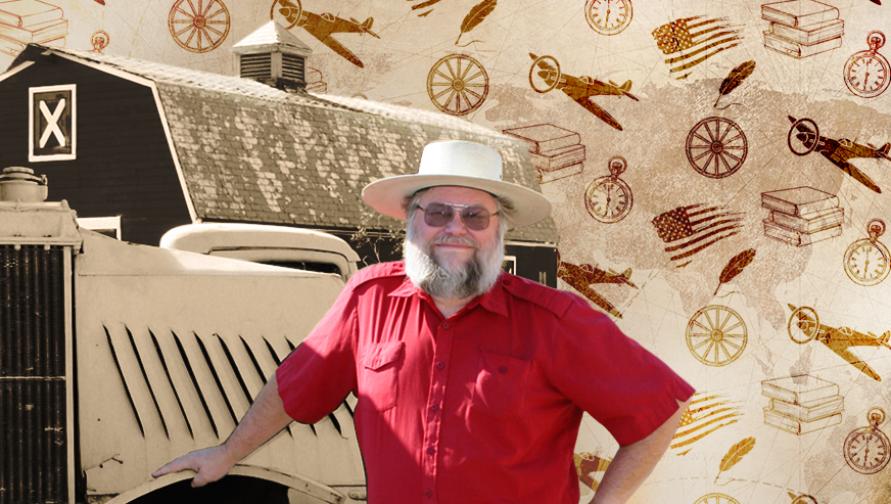 Historian, museologist, educator and nontraditional celebrity dubbed “the beard of knowledge,” Mark Hall-Patton takes history entertainment seriously. The University of California, Irvine history alumnus is perhaps best known as the historical expert on “Pawn Stars,” the wildly popular History Channel reality series, where he has gained a cult following for his vast expertise and refusal to assign monetary value to artifacts.

Hall-Patton has made 195 appearances on “Pawn Stars,” where hopeful customers tote an assortment of keepsakes and artifacts of sometimes questionable provenance, from coins to comics, into the Gold & Silver Pawn Shop in Las Vegas. As one of the show’s most popular and frequently consulted experts (he’s been on since the very first episode, in 2009), it’s Hall-Patton’s job to determine if that beloved family heirloom is a rare antiquity, a clever fake or common as dirt. Full-color battle plans for the World War II amphibious attack on Iwo Jima? Yes, real. That chair that Abraham Lincoln may or may not have sat in? Probably not. “Most of the time, it’s obvious,” he says. “You’re not going to find an original Declaration of Independence folded up in an old Bible.”

When he’s not in front of the camera, Hall-Patton serves as the administrator of the Museum system of Clark County, Nevada, which consists of three distinct museums, located in five locations. He oversees the Clark County Museum, a sprawling 30-acre site that brings in thousands of visitors a year, many of whom hope to catch a glimpse of Hall-Patton in action; the Howard W. Cannon Aviation Museum, and its exhibits throughout McCarran International Airport, Henderson Executive Airport, and North Las Vegas Airport; and the Searchlight History Museum, a small community museum located in Searchlight, Nevada.

Hall-Patton credits his education in history at UCI for giving him the broad base of knowledge essential to running a museum and serving as a public history expert.

“I took all kinds of history courses, as well as intro courses in sociology, anthropology, music, art,” he says. “I took as much art history as I did general history.” Among his favorite classes at UCI was a required “Formation of Modern Society” course taught by a professor who had witnessed, as a young scientist in the South Pacific, the detonation of the first hydrogen bomb in 1952. All the courses, he says, even that “really interesting” class he took on the Third Reich, help with his current job. “You need to have a good grounding in general history before you can even get into the basics of running a museum,” he explains.

Hall-Patton’s love of museums goes back to his earliest days growing up in Santa Ana, Calif. At the age of eight, he was creating makeshift exhibits on his patio out of old stuff he found around the house and giving tours of his DIY museum to his younger brother and sister. “I was a geek from very early on,” he admits.

Although his lifelong dream was to work in a real museum, he had no idea how one went about doing that. “I didn’t even know that there was a field of museology,” he says.

During his senior year, Hall-Patton went to a professor’s office hours and told him that he wanted to work in a museum. The professor scrounged around in the bottom of his desk and pulled out an old pamphlet from the University of Delaware, about a graduate program in museology there. Though he did not complete the program, Hall-Patton gained the jump-start he needed to become a museologist. He spent four years in Sioux Falls, South Dakota, and then moved back to California, serving as a director of museums in Anaheim and San Luis Obispo before making his way to Las Vegas, where he became head of the Clark County Museum system.

In 2009, Hall-Patton got a call from a television producer in New York about a new reality show they were planning to shoot in, of all places, a Las Vegas pawnshop. The producer wanted to know if he could look at a West Point uniform jacket and tell them if it was real, and if he could do it with a camera rolling. Hall-Patton said yes. But when asked if he could tell viewers what it was worth, he balked. “I’m the only one that never gives them a price,” he says. “People always ask me, why don’t you give them a price? I’m like, I don’t sell this stuff. I run a museum. That’s not my thing.” It was Hall-Patton’s decision from the beginning, despite push-back from the producers of the show, that he would not speculate on the value of items and instead focus on the item’s specific provenance and place in history. Not only does he not care about the worth of historical artifacts, he says, museum professionals are also required by law not to provide them.

The long-running gig has led to appearances on a variety of shows, both history-related and otherwise, from “American Restoration,” “Mysteries at the Museum,” “America Facts and Fallacies,” and “United Stuff of America” to “TMZ Sports” and “Nightline.”

Over the years, his appearances on history shows have given him the opportunity to see a three-piece silk suit worn by George Washington; an opera cape that John Wilkes Booth left at the home of a paramour a week before he assassinated President Lincoln; and one of the original pikes that the abolitionist John Brown ordered for his ill-fated attack on Harper’s Ferry. “I’m the only person I know of in all of reality television who has been the expert on two different toilet seats,” he laughs (one was on a NASA space shuttle; another serviced the pilots on a record-setting, 64-day endurance flight in the winter of 1958, currently on display in the Cannon Aviation Museum at McCarran International Airport).

He’s also the author of four books, and has written 450 articles. “I have the same disease that a lot of historians have,” he says. “If I find something interesting, I research it and write about it, and think people want to hear about it.”

With his museums currently shuttered because of COVID-19, Hall-Patton is bringing history to the people. Once a week, he does a short lesson “for families who have their kids at home,” which airs on a local Nevada station. For the rest of us, he’s taping Facebook Live question-and-answer sessions every Wednesday which are archived on the Clark County Museum Facebook page for anyone to view at their leisure. Topics have ranged from Hall-Patton’s extensive book collection (he has a personal library of 20,000 tomes, not counting his museum’s stash) to the historical inaccuracies in the 1991 Warren Beatty film “Bugsy,” which detailed the infamous gangster Benjamin “Bugsy” Siegel’s doomed run in Las Vegas. “I despise ‘Bugsy,’” he says.

His advice to UCI history majors? “Think broadly about what you want to do,” he says. “There are a lot of options out there. My son is ABD (all-but-dissertation) in history at the University of New Mexico, and he’s got a YouTube show, ‘Cynical Historian,’ with over 100,000 subscribers. A lot of times when people think about history, they only think about being a professor or being a writer, something like that. But there’s a lot more out there today, a lot more than I ever thought about.”