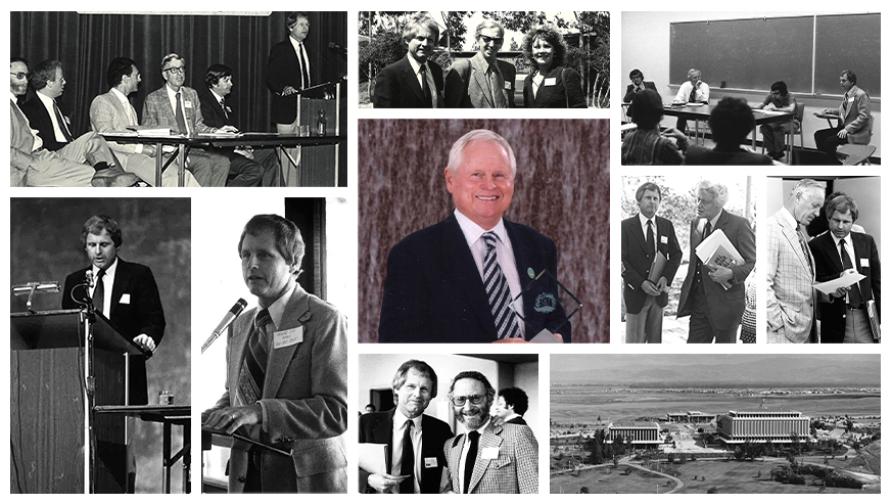 In 1965, when UCI opened its classroom doors to 1,589 students, 241 staff members, 119 faculty and 43 teaching assistants, the campus was a microcosm of what it is now. Aldrich Park – named after the founding chancellor Daniel Aldrich – was at the center of only a few monumental buildings, and a quarter of them were still under construction. The School of Humanities (then known as Division of Humanities) only had four departments: English and comparative literature, foreign languages and literature, philosophy, and history.

At 28 years old, with a freshly minted Ph.D. in history, Professor Emeritus Spencer Olin became one of the school’s founding faculty members. His specialties are modern American history and California history. Olin has authored, coauthored, or coedited six books and anthologies on topics such as reform movements, race relations in California, California politics, the causes of international conflict and the nature of metropolitan development in contemporary America.

Over half a century later, he recalls the history of UCI itself.

“UCI has helped bring to Orange County a public awareness that the county might not otherwise have had without the existence of UCI,” Olin says. An expert in Orange County history, he coauthored the book Postsuburban California, which deals with the transformation of Orange County since World War II and was selected by the Western History Association as the most outstanding book about the 20th century American West.

Yet UCI is more than just a core part of local history. “Over the years, the university has developed a very strong reputation, both locally and nationally, and the growth has been quite phenomenal,” says Olin, who notes that the student body is pushing 40,000.

From the late 1960s to now, Olin has served the UCI and Orange County communities in several capacities, allowing him to observe the tremendous growth of the university from multiple angles.

He was acting vice chancellor for Student Affairs from 1965 to 1966, chair of the Department of History from 1977 to 1982, chair of the Academic Senate from 1986 to 1988, dean of the School of Humanities from 1992 to 1996 and acting executive vice chancellor in 1994. In 1998, he received the UCI Medal, the University of California equivalent of an honorary degree, and in 2006, he was recognized by the UCI Alumni Association with its highest honor: the annual Extraordinarius Award.

His administrative experience during his first year at UCI, along with his teaching and scholarly background, provided him with a unique perspective: “It opened my eyes to, and indelibly impressed upon me forever, the significance not only of faculty members but also of staff members, and their often unacknowledged and yet absolutely essential contributions to UCI’s overall development.”

Since retiring in 1997, Olin has continued to support UCI in numerous ways. He has served as acting director of the Center for Global Peace and Conflict Studies (2001-2002), as a member of the Graduate Dean’s Leadership Council (2018-2020) and as a member of School of Humanities Dean’s Leadership Council for the past three years. In recognition of these most recent activities, he was selected as Outstanding Emeritus Awardee for 2020-2021.

Yet his most rewarding and proudest accomplishment was directing the Humanities Core course from 1989 to 1992, he says.

Humanities Core, a three-quarter sequence of lecture and writing classes for freshmen that explores a chosen theme through the study of literature, film, history, philosophy, popular culture and visual art, has been a hallmark of UCI’s humanities education since it was founded in 1970. During the year-long course, over 900 incoming students—the majority of whom are not humanities majors—are exposed to different teaching styles and academic methodologies, while simultaneously learning how to adapt to a range of different writing and communication contexts. Such practical skills can translate to any major and continue to make an impact beyond graduation.

“It’s a fabulous course, and I think other campuses have tried to replicate it and have struggled,” Olin says. “It is enormously difficult to have faculty members from various departments work together collaboratively, but UCI conquered that way back in the early 1970s, and we’ve kept that course going now for 50 years. I’m very proud of that course, and I think everyone in the school is.”

When he was director of the course, the theme was “Confronting cultural differences: belief systems, gender and race.”

“In each quarter, we had a team of three faculty members who directed their attention to, and assigned books in, those three topics, and I learned a lot from them, listening to their lectures, and conducting an honors discussion section,” Olin says. Humanities Core discussion sections have always been small, in order to increase teacher-student interaction. “I had 20 students and it was a great experience; they were wonderful. When graduating seniors are asked, ‘What course most affected you or most transformed you intellectually?’ A common response is, ‘The Humanities Core course.’”

“The humanities encourage an attention to critical thinking and the careful evaluation of evidence in order to reach compelling and original conclusions about significant issues,” Olin says. “I think that’s characteristic of all the disciplines in the humanities.”

Outside of Olin’s formal roles, he has organized regular breakfasts and lunches to bring UCI community members and faculty together to share information and insights. He shares his UCI pride with his wife, who is a retired UCI management services officer and financial analyst, and his son, daughter-in-law and step-son – all of whom are UCI alumni.

Olin has also been a consistent donor to the university since 1969, giving primarily to the School of Humanities and UCI Athletics for a total of 40 years. He further supports fundraising efforts by serving as the faculty representative on the Executive Committee of the Brilliant Future Campaign, to which he brings his vast experience as a retired faculty, dean, historian and long-time donor.

“I am very grateful to have had all of these opportunities – and more – to participate in UCI’s evolution,” Olin said during a speech for the Brilliant Future campaign, which has so far garnered over $1.14 billion in support for key campus initiatives. “It’s my considered opinion that our campus has addressed its many challenges creatively and highly successfully, such that those of us who contributed over the years by various means have every reason to feel immensely proud of our collective achievement.”