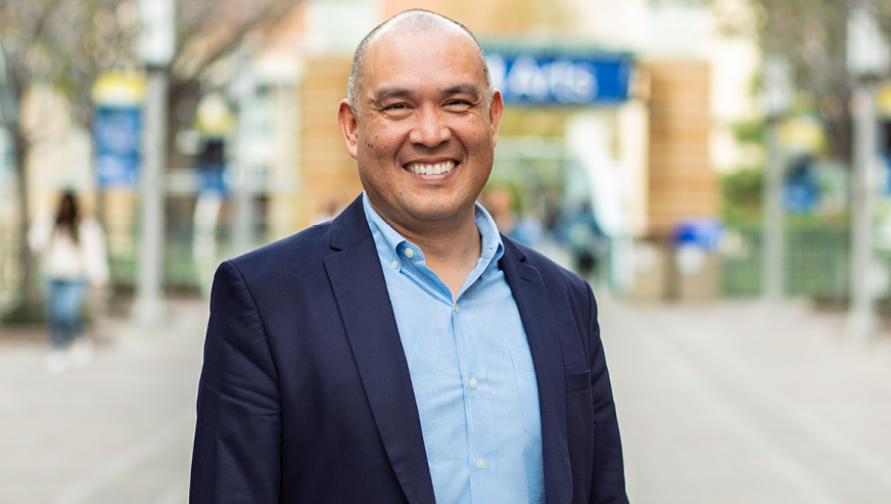 Dr. Rigoberto (Rigo) Rodríguez came to the University of California, Irvine as a late admit in the winter of 1988. The admission letter arrived after more than 20 college rejection letters had depleted his hope of ever attending college.

“I went to four different high schools and I remember thinking ‘Who is going to make sense of these transcripts?’ I didn’t know what kind of potential I had but I was happy UCI saw some in me,” Rodríguez says.

Rodríguez (’93 B.A.s in comparative literature and Spanish literature, ’99 M.A. urban & regional planning) didn’t even know where Irvine was at the time. Born in Salinas, California into a Mexican farmworker family, he was the youngest of thirteen children and one of the first generation in his family to go to college. He knew almost nothing about the process for getting into college and what to do when he actually got there. Despite those barriers, he hopped on a bus with $8 in his wallet and a plastic bag of his clothes.

“I had just enough money to get a taxi cab to bring me [to UCI]. I just showed up the Saturday before the semester started. The staff member was shocked that I didn’t have a place to stay but she found me a spot in Mesa Court, got me a student I.D. and got me settled,” he says.

It continued to be a steep learning curve over the next few years, but what Rodríguez saw modeled persistently in UCI’s School of Humanities and what continues to inspire his own work today, is the commitment by the faculty to put the humanities in action.

The one who embodied that quality the most and whose influence cuts across the trajectory of Rodríguez’s personal and professional life is Julia Lupton, UCI professor of English and co-director of the UCI Shakespeare Center.

It was a course on Greek and Roman mythology taught by Lupton that changed him. He recalls her enthusiasm and persistent challenging of the class with “why do you believe that?” and “what is the context?” He found her classes so fun and engaging that he actually felt guilty at times. He was supposed to be “working,” but it didn’t feel like work.

“As a child of a farmworker, you associate work with sweat and backaches and your hands being dirty. As a first-gen student, it was a culture shock but mediated by the professors who were role modeling things that I didn't quite understand and helping me work through the transition,” he says.

At the end of that quarter, Lupton encouraged him to apply to the Humanities Honors program and then she acted—walking him over to the professor who was running it that year and getting him signed up.

“Julia was able to identify that I had this deep interest and curiosity. It was a small group—maybe eight of us in the program—but we were intense, debating, almost shouting at each other and I loved it. We were like a family,” Rodríguez says.

It gave him the confidence to branch out into philosophy, feminist theory, and Chicanx/Latinx studies—to ponder life’s big questions while also coming to terms with his own identity and history.

Lupton’s lesson—it’s not just about ideas, it’s also about actions—continued to resonate. He became involved with student organizations on campus—editor for La voz mestiza (the Chicano/Latino campus newspaper) and then the co-chair of M.E.Ch.A. (Movimiento Estudiantil Chicanx de Aztlan)—an organization for Chicanx/Latinx students.

From there, Rodríguez helped form a coalition with the Black Student Union, the American Indian Council and the Asian Pacific Student Association that coalesced into E.S.C.A.P.E. (Ethnic Studies Coalition Against Prejudicial Education). They fought for the establishment of the African American, Native American, Asian American, and Chicano/Latino studies programs at UCI and succeeded. During that time, he also served in the student government as vice president for academic affairs and then as president his senior year.

“I wanted to make sure that the university heard us—that we needed and wanted departments that would house courses and opportunities in this area of knowledge about our communities and our experiences,” Rodríguez says.

As he was nearing graduation and intending to become a literature professor, the Los Angeles riots began. They ignited his curiosity about the social structures that contributed to the uprisings and he changed course to become a community organizer for the non-profit Delhi Center in Santa Ana. Over time, Rodríguez realized that many of the neighborhood issues he was dealing with—streets, parks, safety, schools—revolved around the use of space—how it’s regulated and how its structure can impact our everyday lives and opportunities.

This inspired him to return to UCI, this time to pursue a master’s degree in urban and regional planning. Despite being on a different side of campus and outside of the humanities, he crossed paths again with Lupton. At the time, she was developing an innovative early education curriculum called Humanities Out There (HOT) and introducing Greek and Roman mythology to second and third-graders at Heninger Elementary in Santa Ana. The students would write about the characters but also tell their own stories through the narrative structure of the mythology.

“I basically got trained on it and developed a program evaluation framework for her to collect data, measure effectiveness and improve outcomes for the students. I was amazed. She was taking the humanities—the concepts I was exposed to in college—to these young kids in Santa Ana. Again, I thought, she walks her talk. And that really reinforced for me the importance of early education and taking the humanities out to the places you would least expect,” says Rodríguez.

This is where the student becomes the teacher—having been nearly rejected from every college he applied to, Rodríguez now had a B.A. and M.S. and later earned a Ph.D. in urban geography from USC. In 2006, he joined California State University, Long Beach and has been a faculty member of Chicano and Latino Studies ever since. He currently serves as board president of the non-profit Delhi Center and as vice president on the Santa Ana Unified School District Board of Education. These roles allow him to be an advocate for early education and to provide internships and service-learning for college students similar to the ones Lupton modeled for him.

“I look back on that special action admission letter and I never thought I’d achieve what I did. That was an opportunity given to someone who otherwise would not have had access and I think that’s the power of public education and the essence of my experience at UCI,” Rodríguez says.