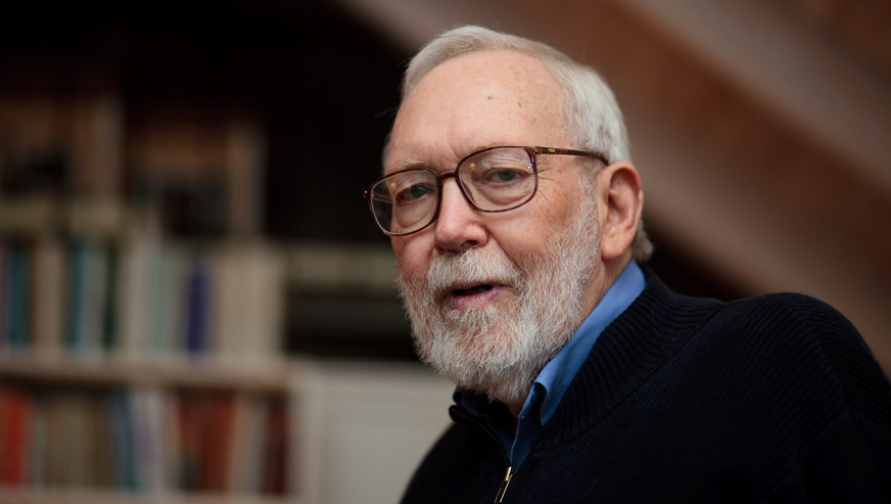 Office of the Dean
SHARE
It is with great sadness that I report the death of Distinguished Professor of Comparative Literature and English J. Hillis Miller (1928-2021). He passed away at 92 years old in Sedgwick, Maine. An immensely productive and influential literary critic and theorist over a period of nearly seventy years—as well as a remarkably generous and effective mentor to several generations of doctoral students in literary studies, including many of the best-known figures in the field—Professor Miller made tremendous contributions to the humanities at UCI as scholar, as teacher, and as campus citizen.

J. Hillis Miller’s path traversed not one but at least four careers. The first of these was his nearly twenty years at Johns Hopkins University (1953-1972) where he distinguished himself as a talented scholar of Victorian literature and as the American “ambassador”—and himself an important member—of the Geneva School of literary theory. His second career spanned his years at Yale University (1972-1986) where (along with Paul de Man, Harold Bloom, and Geoffrey Hartman) he gained fame as a member of the “Yale School” of deconstructive literary criticism. Professor Miller was known as the “Yale School” member willing to explain “deconstruction” to a wider world, including efforts in Newsweek and The New York Times Sunday Magazine. The third career would be his years (1986-2001) as indefatigable Distinguished Professor of English and Comparative Literature at UCI where he, along with Jacques Derrida (whom Professor Miller brought to UCI), was the main shaper of UCI’s reputation as a center for the rigorous study of “theory.” It was during these years that the highest ranked Ph.D. programs at UCI were all in Humanities, in great part due to Professor Miller’s stature and to his successful recruiting of other major scholars. But his fourth career would be his years since retirement. Professor Miller’s achievements in “retirement” constituted what would be a full and very distinguished scholarly career for lesser mortals. This is the case not only in regard to the volume of publications—at least fifteen books, with more in production, and numerous articles—and, for a good number of years, an international lecturing schedule (particularly in China) that many a younger scholar would not be able to keep up with. It is also true of Professor Miller’s work as teacher and mentor. After “retirement,” he served as chair or member on the dissertation committees of at least twenty students in English and in Comparative Literature, while also supervising many dissertations at UCLA, Berkeley, and the University of Queensland. As all who knew him within the academic context would affirm, Professor Miller was the most generous teacher that anyone will ever come across. His was above all an intellectual generosity: a willingness to see students’ thoughts and projects through to the end without either preemptive acceptance or dismissal. But it was also a simply personal generosity with his time and effort that was a response to a genuinely ethical imperative to treat others with the respect due to “the other.” If Professor Miller was what one calls a “beloved” teacher, it is no doubt because students recognized this trait and appreciated being treated with respect—intellectual and personal.

Professor Miller received his B.A. from Oberlin College and the Ph.D. from Harvard University (1952). He was active in professional organizations like the Modern Language Association, serving as the President of the MLA in 1986. Remarkably prolific, Professor Miller authored thirty-five influential books and countless articles. His wife Dorothy Miller and Hillis were known for years as gracious and generous presences on campus and at University Hills. Dorothy Miller passed away a few weeks before Hillis. They will both be sorely missed. The School of Humanities will organize a memorial event. For those interested in updates about the memorial event, please subscribe here.

Written by Andrzej Warminski, associate dean for academic personnel and professor of English