UCI students train for Ethics Bowl, proving the most powerful opinions are the ones most logically thought out

Should vaccinations be mandatory? Do we have a moral responsibility to stop climate change? Should social media sites censor false advertisements? For the past several months, five University of California, Irvine undergraduates from various majors trained to compete in Ethics Bowl, a competition in which teams of students from universities across the Southern United States debate ethical dilemmas like these ones. They were led by philosophy Ph.D. student and former Ethics Bowl participant Itzel Aurora Garcia.

“Ethics bowl is unique in that both teams might actually agree on the topic. You ‘win’ by having the clearest, most logically thought out arguments and by being able to critically assess the other team, even if they agree with you,” says Garcia.

From the beginning of the fall 2019 quarter, the Ethics Bowl team gathered once a week to review and discuss real-world issues, split into groups and follow the fast-paced Ethics Bowl structure through which they debated each other on issues such as social media censorship, cancel culture, vaccinations and climate change. Garcia acted as a stern and scrutinizing judge over the undergraduates, who brought public speaking, critical thinking and research skills to their presentations. After their mock debates ended and she gave them feedback based on the Ethics Bowl rubric, her hard façade fell, and she returned as their warm and trustworthy mentor.

Although Ethics Bowl functions on philosophical principles, the students participating come from diverse academic backgrounds. Anjali Nambiar is a sophomore majoring in biological sciences and Griselda Alcala is a senior majoring in political science. Nina Rucci and Krista Podesta are both juniors majoring in philosophy. Michelle Gutierrez, the club president, plans to change her major from biological sciences to philosophy. For all of them, it’s their first time competing in Ethics Bowl. Teams are often trained through rigorous philosophy courses and under the guidance of professors, so Garcia’s crew is a bit different. The group is incidentally all-women, and most of them are women of color, engaging in a field that has long been perceived as being dominated by white men.

“It’s important for women, especially women of color, to get involved in philosophy because this field has been male dominated for so long,” Podesta explains. “The diversity amongst our team helped bring difficult issues to light. For an issue or topic that I may have overlooked or not understood, my teammate may be able to better illuminate the moral and ethical dilemma so that I can understand it more clearly.” 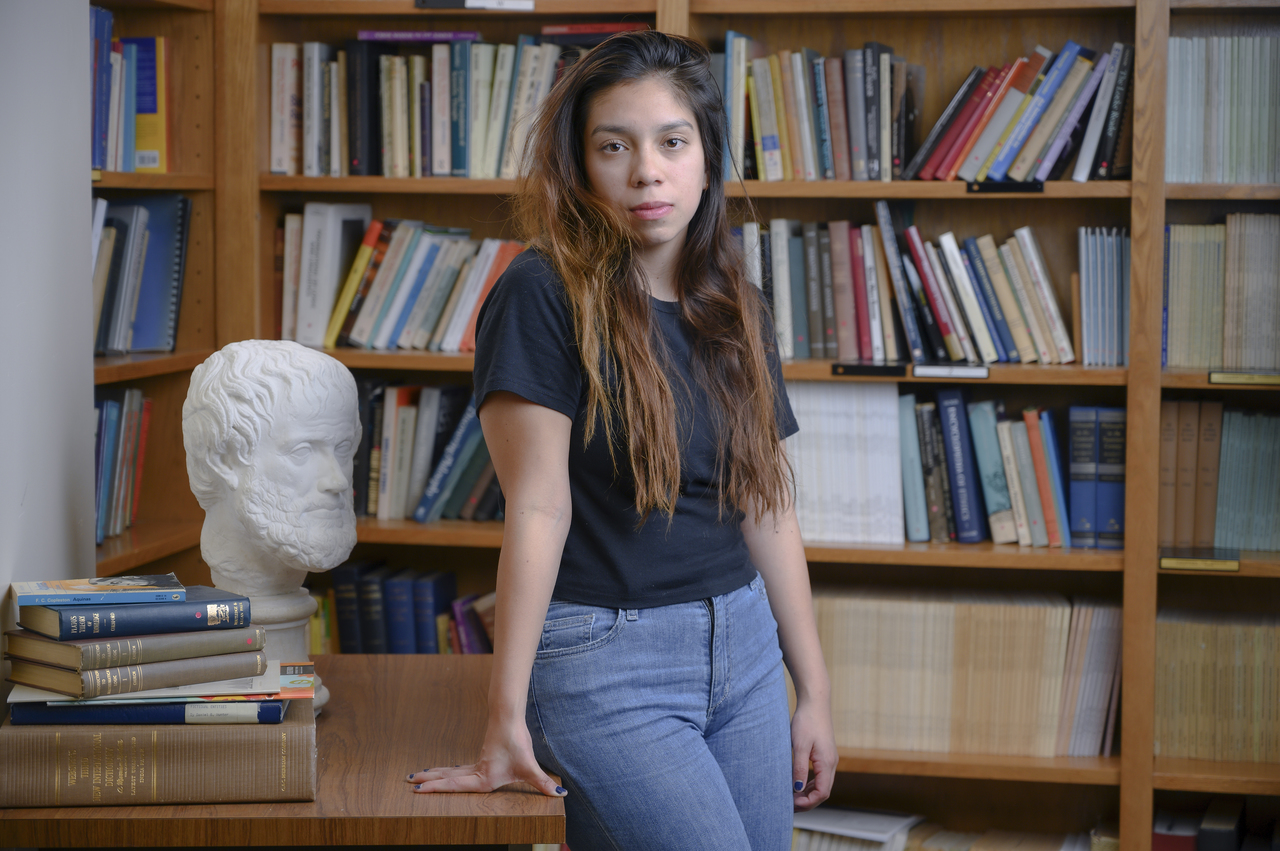 Garcia recognizes that although the older paradigm of white-male-dominated western philosophy is slowly falling apart, the stereotype does bear some truth. Growing up, she could never envision that she would one day become a philosopher. As a child, she often wondered whether she had just dreamt up the world she lived in, and she actively sought answers for her existential questions. “I was always thinking about philosophy without even knowing what it was,” she says.

“I didn’t even know it was a possible career choice. My previous options were: go to school, be an engineer. But sometimes it wasn’t even ‘go to school,’ so my mind was blown that this was an option available to me,” says Garcia. “Even now, when I go back home, my family still asks, ‘So what do you do?’ Philosophy is not super inclusive, and in my culture, it’s not seen as accessible.”

Like some of her Ethics Bowl team members, she was not originally a philosophy major. Instead, she began her undergraduate career as a physics major. But her path took a quick turn after she took her first intro to philosophy course, and she instantly fell in love with the field. Through her study of epistemology, which concerns itself with the nature of knowledge, she found that some people had answers to the questions she had been asking herself her whole life.

She says that to this day, she still hasn’t found a satisfactory answer for whether life is a dream or not. But that’s part of the appeal: the process of seeking answers for difficult questions. Her current studies, which will make up her dissertation, delve into the issue of police authority. She argues that people don’t have moral obligations to obey police authority; as in, they may have other reasons to obey police authority, but morality does not have to be one of them. Her dissertation will be breaking ground in a field that has not always accepted the validity of ethics in philosophical discourse. The merit of ethics as a field of study, however, cannot be understated. Ethical dilemmas surrounding incidences of police brutality have led to numerous debates, the influential Black Lives Matter movement, and even mass protests. Garcia knows how important it is to consider ethical issues through the lens of a philosopher, with arguments that can hopefully have a more lasting impact.

“Philosophy teaches you to be open-minded, especially when you encounter someone who has an opposite opinion. It also helps you make stronger arguments, simply because you have thought about something for so long. People tend to hold onto opinions they haven’t really thought out completely.”

That’s why participation in Ethics Bowl requires so much practice. The more the team thought about and discussed an issue, the stronger their argument would be at the tournament. At the regional Ethics Bowl competition, which took place on December 7, 2019 at Arizona State University in Tempe, Arizona, the 1-to-2-page write-ups outlining the issues the teams would debate presented some challenges. While the team had prepared for a debate on sex work—whether it should be legalized or not—they were then asked to consider under what conditions should sex work be legalized.

Nambiar impressed the judges with her swift thinking regarding a dilemma about religious beliefs versus mandatory vaccinations, winning them a round. According to Garcia, two other rounds were very close. The team will reconvene during winter quarter and compete again next year.

Garcia recalls that the first time she competed as an undergraduate, she and her teammates lost all four rounds. In subsequent years, however, they made it to nationals. With this firsthand experience, she is confident that with more thinking and practice, the young women of the current team will go far.

With additional reporting by Audrey Fong A doctor for all UCI students train for Ethics Bowl, proving the most powerful opinions are the ones most logically thought out