Tales from Tent City and the Dance Floor: South Korean Soft Power or a Self-Governing A.R.M.Y? 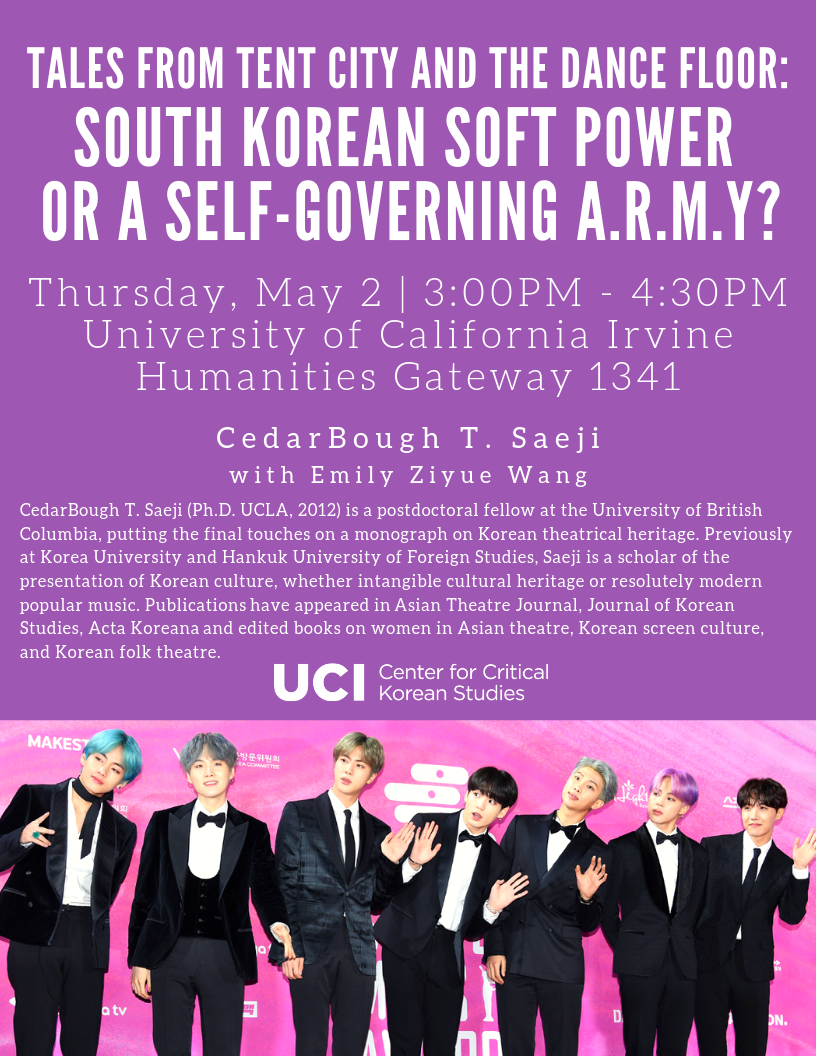 Tales from Tent City and the Dance Floor:
South Korean Soft Power or a Self-Governing A.R.M.Y?
CedarBough T. Saeji
Emily Ziyue Wang
The power of K-pop fandom has deservedly awed international observers during the past year as the K-pop superstars BTS shot into the limelight propelled by the passion of their fanclub, the A.R.M.Y. Fandom for the beloved septet has revealed numerous contestations. Four entities have a vested interest in BTS fandom: BTS, Big Hit Entertainment, the Korean government, and the A.R.M.Y.

In this presentation, although we recognize that BTS and Big Hit’s desires are predictably related to fame and fortune, we delve into how and why the Korean government and the BTS fandom have played a part in fulfilling the commercial desires of what is now K-Pop’s leading group and highest earning management agency.

We explore how the Korean government, a long time investor in Korean popular culture industries, tries to promote their own soft power agenda through spending on K-pop events and nation-linked promotion. We illustrate this with an exploration of the government’s investment in the Changwon K-Pop World Cover Festival. Cover dancers discipline their bodies, and simultaneously their minds to ever-increasing positivity towards Korea as they become an amplification of the idols’ popularity, and borrowed national bodies extending Korean cultural diplomacy to far flung corners of the world. The government’s strategic financial investment in cover practices are read through media and interviews with participants in the Changwon festival where BTS’s presence was felt so distinctly that one of the competition categories was dedicated to BTS covers.

The activities of the government are contrasted with the activities of the A.R.M.Y., who selflessly, without wanting anything more than acknowledgement from their idols, are devoted to promoting BTS. Their motivations, consumption habits, and subculture re-imagine the role of mainstream fan audiences, and are the force propelling their idols to drive contra-flows of music media into the West. Close analysis based in organizational participation of organized A.R.M.Y activities illustrated by the tent city at Citifield Stadium in New York City for the October 6th, 2018 concert, reveals that beyond building a relationship between idol and fan, BTS is cultivating a new culture between fans. It is the relationship of fans with each other that has allowed the A.R.M.Y. to achieve goals that previous popular music groups could not.

If you have any questions, please contact Joo Hoon Sin at sinjh@uci.edu.