19Oct
Notice! This event has passed.

Ruben Espinosa, "Beyond the White Savior: Shakespeare and The Stranger's Case" 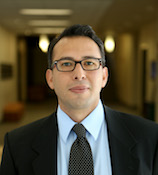 Beyond the White Savior: Shakespeare and The Stranger’s Case
A talk by Ruben Espinosa, Arizona State University

Register in advance for this meeting

Shakespeare’s social capital has positioned him as a touchstone for many of those attentive to social justice issues, and as such, his works are often thought to offer understandings or answers to the manifold social ills we encounter in our present moment. Much too often, Shakespeare is thought to hold the key. Indeed, when it comes to the plight of refugees and the immigration debate, Shakespeare is frequently deployed to lend his authority to those who champion an ethics of hospitality. Shakespeare’s Globe, for example, collaborated with The International Rescue Committee to produce the speech from Sir Thomas More, “The Stranger’s Case,” for World Refugee Day 2018. The speech, thought to be written in Shakespeare’s own hand (Hand D), argues for the humane treatment of immigrants, and thus Shakespeare’s Globe capitalized on this and had professional actors recite the speech alongside actual refugees from various locales. This performance followed a popular and widely circulated reading of this speech by Ian McKellen. Performances of this speech have become somewhat commonplace when considering the issue of immigration in our present moment, but beyond working on our pathos, they have very little to offer in regard to the lived experiences of refugees and immigrants. This essay considers both the energies and the pitfalls of potential virtue signaling behind such performances of this speech as a means of scrutinizing how the actual, horrific policies for family separation that are in place on the U.S.-Mexico border need much more than Shakespeare. Without doubt, the theater has the power to influence attitudes and actions of audiences, but when it comes to attention to the oppression of Black and brown individuals, the efficacy of the theater is left in doubt. While calls for humane treatment of immigrants are certainly necessary, a pointed interrogation of the structures and architects of white supremacy is where we need to focus the collective energies of our academy.

Ruben Espinosa is Associate Professor of English at Arizona State University and Associate Director of the Arizona Center for Medieval and Renaissance Studies. He is the author of Shakespeare on the Shades of Racism (2021), Masculinity and Marian Efficacy in Shakespeare’s England (2011), and co-editor of Shakespeare and Immigration (2014). He was a Trustee of the Shakespeare Association of America (2018-2021), and he serves on the Editorial Boards of Shakespeare Quarterly, Exemplaria, and Palgrave’s “Early Modern Cultural Studies” series. He is currently at work on his next monograph, Shakespeare on the Border: Language, Legitimacy and La Frontera.

Register in advance for this meeting

Co-sponsored by the Department of English.